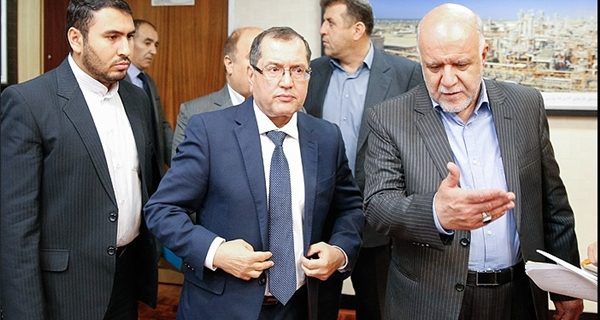 TEHRAN (FNA)- Minister of Petroleum Bijan Zanganeh is to meet Algerian Energy Minister Noureddine Boutarfa shortly on Saturday.
The meeting will be on the eve of the OPEC session in Vienna on Wednesday.
The OPEC members in their September 28 session in Algiers discussed output cut by 200,000 to 700,000 bpd, which will be equal to about one to two percent of the members’ total output.
After the Algeria session, the OPEC high committee session was held in Vienna to discuss fall in the output. Reuters quoted OPEC sources as saying on Tuesday that OPEC high-ranking committee experts had successfully ended its work.
The technical committee mainly comprises members’ representatives in the governing body and also national representatives of any country, who report to related ministers.
The Committee makes no decision and only the proposals agreed by members will be presented to the OPEC ministerial session, which will be held in Vienna on November 30.
Ministers and officials of the OPEC member countries had announced in the past days that OPEC has neared consensus.